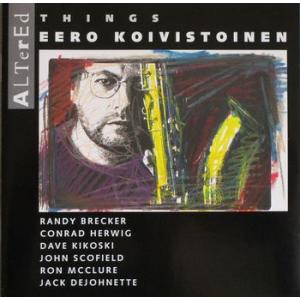 The making of Picture in Three Colours in 1983 had left me hungry – I wanted to make another record in New York. A new chance came eight years later, in September 1991. This time I wanted to have three horns, the saxophone plus a trumpet and a trombone. Arranging for three horns is a challenge, the possibilities for the voicings are limited.

I started planning the project with Ron McClure in good time. We invited Jack De Johnette and John Scofield again, for the trumpet we got great Randy Brecker. Conrad Herwig was to play trombone and Dave Kikoski piano. All of the guys were busy and in great demand, I was lucky to get them along. Now we had a new dream team. Once again, I was really a lucky fellow! We got a smaller room on the B side of the respected Clinton Studio for the 25th and 26th of September, with the experienced Jim Anderson as our engineer. This time, the musicians wished to have demos and sheets of music in advance, if only possible. I sent them material by mail.

When in New York, I stayed at Ron McClure’s place; his couch was already familiar to me from my earlier visits. Before recording, we played the compositions once live at Visiones Jazz Club in the Village. It was good to get some touch with the music before recording it. The studio had been booked for two days, Sco got along on the second day. Most of my compositions were new, Clear Dream – a duo for soprano and piano – was an exception. We also included Kabuki composed by Seppo Kantonen, and Inspiration by Ron McClure.

I mixed the album in Rainbow Studio in Oslo, Norway, with Erik Konshaug. It was good to take some distance before the mixing, listen to various takes, and try to digest them. Bugge Wesseltoft overdubbed synthesizer on three numbers. Timeless Records issued only the CD, vinyl had become outdated by then.

The record was well received, Bill Milkowski of DownBeat described the band in his positive criticism: ”It’s lineup as imposing as the vintage New York Yankees’ mythical Murderers Row.” Down Beat gave the record 4 1/2 stars. The reissue of Svart Records includes my compositions Facts and Never Again and the second take of Clear Dream as bonus tracks.