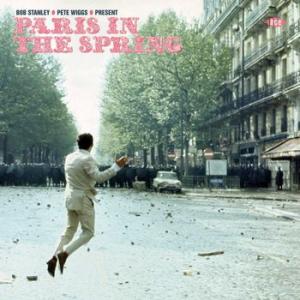 In May 1968, Paris was burning. Out of the student uprising came a new wave in French music that matched the country’s mood – darker, and more introspective than yé-yé, France’s cultural revolution allowed the previously separate worlds of chanson, jazz, pop and film soundtracks to blend into each other. Laden with strings and sample-ready rhythm tracks, this new sound was exemplified by Serge Gainsbourg’s “Histoire De Melody Nelson”, but it wasn’t an isolated classic – this was a golden age for French pop.

Amid the student demonstrations and riots that stretched from Chicago to Grosvenor Square in 1968, France came the closest of all western countries to a genuine revolution. The Sorbonne was occupied. There was a general strike. The government planned to station tanks at Issy-Les-Moulineaux on the south side of Paris. President De Gaulle fled the country, hiding in Germany’s French embassy. The uprising may have superficially concluded with nothing more dramatic than fresh elections, and an ongoing conservative government, but the events of that May are seen as a turning point in the country’s social history – pictures of the barricades are still potent images.

Lines were drawn politically, culturally, socially – pop music, naturally, was not exempt. The music that emerged from France between 1968 and the mid-70s was an extraordinary blend of several previously independent strains – French chanson and yé-yé, American jazz and funk, British chamber pop – shot through with the era’s underlying mixture of optimism and darkness.

Prior to 1968, French pop had been dominated by yé-yé, the country’s unique brand of upbeat pop whose most famous names were the photogenic couple Johnny Hallyday and Sylvie Vartan – it was a world of primary colours, mini jupes and discothèques (a French invention, after all), which appeared not on singles but beautifully packaged EPs. One of yé-yé’s biggest stars, and the only one to have commercial success in the UK, was Françoise Hardy: “We, the singers, were far, far fewer in number than today, and there were fewer radio stations. It was also the heyday of [monthly pop magazine] Salut Les Copains, and the press played an extremely important role – it could promote beginners. However, we were not very popular with the previous generation, or with some journalists, who wanted to pinch us over our ignorance. We often came from relatively poor working class backgrounds, while the next wave of Alain Souchon, Véronique Sanson, Michel Berger, Julien Clerc came from the bourgeoisie. I felt oddly legitimised in the early 1970s.”

If yé-yé was all about the noise of teenage life, then traditional French chanson was all about the words, which the French took very seriously (Dylan meant a lot more in France than the Beatles or the Stones). Poetry and the lyrics of chansons were sacrosanct, and would never have been tainted by what was regarded as the basic silliness of pop. Before 1968 you wouldn’t include serious lyrics in a song unless you were a chanson heavyweight like Charles Aznavour, Jacques Brel, Georges Brassens, Léo Ferré or Barbara. The differences were largely generational; the worlds of jazz, chanson and pop rarely trod on each other’s toes. By 1970, though, Léo Ferré was working with a rock group on a concept album about anarchy and sexual liberation. This bleed between genres was unthinkable before 1968.

Serge Gainsbourg – a jazz pianist with a chanson past and a pop present – was in a position to play a key role in soundtracking France in flux over the next five years. The seriousness and observation in French chanson leaked into pop almost as soon as the student uprising and the ensuing strikes that paralysed the country began. The uprising coincided with a major change in the French record industry. Prior to 1968, almost all French music was released on four-track EPs, and albums simply gathered tracks from these EPs. The album market as we know it didn’t exist in France before 1968. Given the chance to stretch out on a full-length album, and given the political climate, musicians quickly began to think in terms of song cycles.

Was there anything in French pop prior to May ’68 to suggest the imminent sea change? 1966 had seen the rise of the beatnik Michel Polnareff; the sardonic, impeccably groomed Jacques Dutronc; and the Dylan-channelling student protest singers Stella and Antoine, who had a running spat with Johnny Hallyday and ended up on the receiving end of Hallyday’s 1966 hit ‘Cheveux Longs Idées Courtes’. A year on, Dutronc was ridiculing flower power on the terrific ‘Hippie Hippie Hourrah’ while Gainsbourg, a songwriter who had always been the salt in the caramel of yé-yé, went a step further on France Gall’s ‘Teenie Weenie Boppie’: “What are these flowers with exquisite colours that drift with the current? It’s Mick Jagger in the Thames, drowned in his fine clothes.” What yé-yé had tended to avoid – with gentle exceptions like Antoine, Polnareff and Stella – was the growing underground of disillusioned youth, but clearly there was discontent fomenting.

It made sense that the more adventurous acts working in French pop would want to expand their musical palette in the new era, moving closer to both the literary bent of chanson and the progressive and psychedelic sounds of Anglo-American rock. The album was seized upon as a means of expression for already established acts; the result was such era-defining records as Michel Polnareff’s “Polnareff’s”, Françoise Hardy’s “La Question” and Serge Gainsbourg’s “Histoire De Melody Nelson”.

The unsettled national mood also dictated more darkly accented music for films and TV. The result was a hipper background noise, free of accordions, which skilled practitioners like Gainsbourg, his arrangers Alain Goraguer and Jean-Claude Vannier, and jazz musicians like Karl Heinz Schäfer and Janko Nilovic were more than happy to produce. Film director Jacques Poitrenaud has talked about “the arrival in 1968 of a new generation of composers, represented by [Jean-Claude] Vannier. His writing was scholarly, unusual, and influenced by pop.” Typically these writers used a feline rhythmic groove, a hovering Hammond organ, unsettling fuzz guitar, and a full string section to carry their radiant melodies.

Without a doubt, after May ’68 it was fashionable and desirable to be seen as left-wing. Not everyone was on board. Some yé-yé stars, like Johnny Hallyday, were quite keen to distance themselves from the state of near-revolution. Others abandoned music altogether: Hugues Aufray, the folk singer who had introduced Dylan to France with his cover versions and sang for Martin Luther King, went into retirement and didn’t re-emerge until 1972; Antoine, erstwhile king of protest, recorded the disillusioned ‘Ramenez-Moi Chez Moi’ (Take Me Home), then gave up singing to sail around the world. With so much going on, and so many new possibilities for French music, they weren’t really missed.