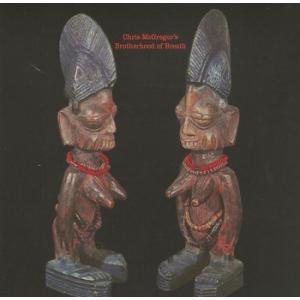 A classic title from 1971 by Chris McGregor's magnificent big band -- Brotherhood Of Breath. Arguably one of the most influential albums to emerge from the London jazz scene of the early 1970s. The Brotherhood of Breath was an exuberant big-band created by South African born pianist and composer Chris McGregor. In South Africa, McGregor had formed the racially mixed Blue Notes in the early 1960's. By 1964, finding it very difficult to work at home, they left for Europe, finally settling in London in 1966. The Blue Notes -- Chris McGregor, Dudu Pukwana, Mongezi Feza, Johnny Dyani and Louis Moholo -- made a huge impact on London's jazz scene and befriended many in London's emerging avant-garde jazz community. The Brotherhood Of Breath was essentially the expatriate Blue Notes augmented by a large number of their friends from the British jazz community. The ensemble played an energetic mixture of Duke Ellington, Charles Mingus and Sun Ra but retained a unique feel due to the South African influences and the intelligent arrangements. McGregor dreamed of keeping the band together 'not as an institution, but as a community.' Unfortunately the economics of touring with such a large ensemble made that impossible. The group with a varying line-up continued to perform and record sporadically until McGregor's untimely death in May 1990.