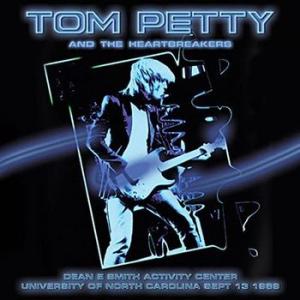 Petty was at the peak of his career and fast becoming a cornerstone of American blue-collar rock as well as an MTV regular.

Tom Petty and the Heartbreakers' 1989 Strange Behaviour tour found the band in somewhat troubled territory promoting what was Petty's acclaimed debut solo album Full Moon Fever, a collaborative effort that involved most of The Heartbreakers and ELO's Jeff Lynne. To add to the discomfort, Petty and Lynne were also cavorting to great success as the Travelling Wilburys with Roy Orbison, Bob Dylan and George Harrison.

However, The Heartbreakers gave an energetic and charged performance showing that the band were still very much intact and in control, teasing the crowd with a selection of their revered repertoire spanning eight albums and thirteen years of all-American appeal. Their appearance at the Dean Smith Centre on September 13th provided an abundance of hits to satisfy even the most hardened spectator with; Refugee, Breakdown, The Waiting, Don't Come Around Here No More, Free Fallin' an acoustic take on Even The Losers and his then current single, I Won't Back Down.