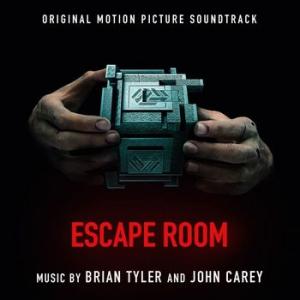 Six strangers find themselves in circumstances beyond their control, and must use their wits to survive. Brian Tyler and John Carey co-scored to Escape Room. It's an entertaining one, with developing tension when the movie's story is getting darker. One of the year's most anticipated soundtracks shows how the two complement each other in an impressive way.

Brian Tyler is a composer and conductor of over 70 films and was named Film Composer of the Year at the 2014 Cue Awards. Tyler composed blockbuster hits Avengers: Age of Ultron, Furious 7, Iron Man 3, and Thor: The Dark World. He conducted the London Philharmonic, the Philharmonia of London, and the Hollywood Studio Symphony for those films. He also scored “Eagle Eye” for producer Steven Spielberg, and the recent “Fate of the Furious”, which had the biggest global box office opening of all time. He was nominated for a 2014 BAFTA Award and was inducted into the music branch of the Academy of Motion Picture Arts and Sciences in 2010. He also wrote the new Formula 1 theme for global broadcast which debuted this season in late March. John Carey has worked in Tyler's team over the last couple of years and has been credited as a music arranger on projects such as Avengers: Age of Ultron, Now You See Me 2 and The Mummy.