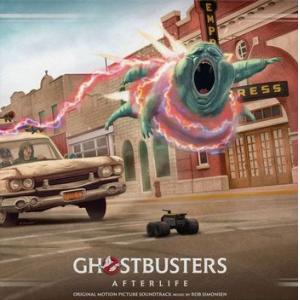 Ghostbusters: Afterlife is co-written and directed by Jason Reitman and stars Carrie Coon, Finn Wolfhar, Mckenna Grace, Annie Potts, and Paul Rudd. The film follows a single mom and her two kids who arrive in a small town, where they begin to discover their connection to the original ghostbusters and the secret legacy their grandfather left behind.

Rob Simonsen rejoins director Jason Reitman with his score for Ghostbusters: Afterlife, having Scored The Front Runner & Tully for the director. Other recent film scores include The Friend, The Way Back, and Love, Simon. Based in Los Angeles and ever with his finger on the pulse of contemporary music, he co-founded the influential collective The Echo Society with the mission 'to inspire, challenge, enrich and connect the community through the creation and performance of new sonic and visual art'. Simonsen's debut artist album Rêveries was released in 2019 on Sony Masterworks.

Ghostbusters: Afterlife is available as a limited edition of 2500 copies on “Muncher” coloured vinyl (crystal clear & transparent green). The heavyweight gatefold sleeve has a special UV Spot varnish + embossing finish. The package contains a printed innersleeve and 4-page booklet (featuring several of your favorite mini-pufts!) and a special litho of the gatefold artwork.