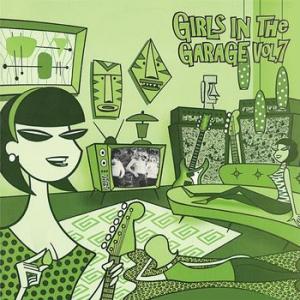 Prior to Joan Jett, Patti Smith, Courtney Love and other era-defining Women in rock, there were the girls in the garage. Like their male counterparts discovered, being in a band was not only cool and alluring, it was sexual and ultimately political without making a ‘political’ statement. The garage band was a medium that enabled a voice to be heard, an adolescent fury of angst and frustration or plain old hormones. Girls In the Garage captures the raw essence of those juvenile dreams played out through guitars, drums, mics and amplifiers. Prevailing gender roles would be tested, as rock ‘n’ roll became someone else’s domain the girls!!

The arrival of rock ‘n’ roll and the teenager not only belonged to the boy next door, it aroused the aspirations and emotions of the girl. Although it’s been said that it was rare for a girl group to play on their own records in the mid-1960s, they were not alone. On both sides of the Atlantic, cynical and shrewd producers largely employed session musicians, afraid of any conceivable faults at the hands of such young and innocent hands, male and female. The ones who didn’t were bold visionaries that believed not only in a new generation’s ambitions, but capabilities too. As the rise of a female presence in rock ‘n’ roll rose through the appearance of figures such as The Vejtables’ Jan Errico, the Honeycombs’ Honey Lantree, and the fabulous Maureen Tucker (whose deliberately primal technique is such an undervalued part of the Velvet Underground’s sound), so too did the rise of all-female bands. Liverpool’s Liverbirds and Hull’s Mandy and The Girlfriends gave weight to the idea that it was ‘normal’ and paved the way for likeminded girls to drop the dream boy and pick up the guitar!

Although, the prevailing attitude amongst both major and independent record labels was never going to be inspiring or welcoming, like the wailing blues mamas such as Memphis Minnie or Jessie Mae Hemphill, times were-a-changin’ and girls didn’t just want to have ‘fun’. Emerging groups such as the Pleasure Seekers, White Boots, Ace Of Cups, Bittersweets, and the Luv’d Ones were playing rock ‘n’ roll on their own terms whilst breaking new ground – whether they were trying to or not. Prepare yourself, as hell hath no fury like….