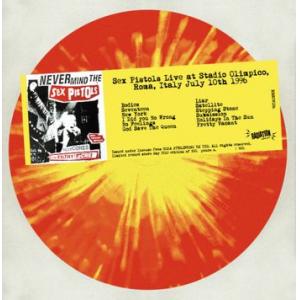 Packaged in a deluxe transparent sleeve and pressed on full colour splatter vinyl, here is a 300 copies limited edition of the recording of the Sex Pistols live performance at the Stadio Olimpico in Rome in 1996. This was the very first Pistols reunion, the so called "Filthy Lucre" tour featuring the original line up with the legendary Glen Matlock on bass. On July the 10th the band appeared in Rome as part of a one day festival, sharing the stage with heavy weights such as Iggy Pop, Bad Religion, Slayer and Sepultura. The Pistols threw out a killer set featuring the most of their hits, "No Feelings", "Pretty Vacant", "Holiday in the Sun", "God Save the Queen" and other generational punk anthems.