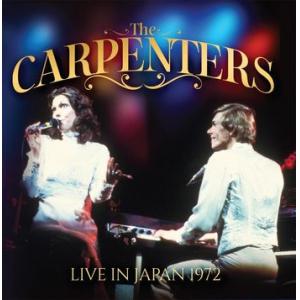 The Carpenters, live from the Budokan Hall, Tokyo on June 2nd 1972, including bonus tracks from Carnegie Hall, New York on May 14th 1972 ‘A Tribute to Burt Bacharach’.

Look beyond the familiar sickly sweet, coy images – and the later tragedy of Karen’s death, aged just 32 – and it’s possible to see that (the) Carpenters were musical mavericks: not least for selling 150 million records in an era when rock, punk and prog rock were ruling the roost. The two prized performances presented here, capture a golden era in the Carpenters’ legacy, defined by the charismatic rich alto tones of Karen, and the perfectionist approach of Richard who delivers it flawlessly. Applause very proudly presents the entire original broadcast of the Carpenters, live from the Nippon Budokan Hall, Tokyo in June 1972. Professionally re-mastered original broadcasts with bonus material taken from the duo’s live tribute concert to the Bacharach/David songbook from New York’s Carnegie Hall in 1971.