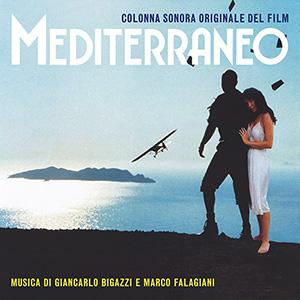 “Mediterraneo” is a film directed by Gabriele Salvatores, set during the Second World War on the Greek island of Castelrosso, a few kilometers from the Turkish coasts. In this place, only apparently uninhabited, some Italian soldiers arrive on a mission; they will soon find themselves to be completely isolated, forced to wait for any communication signs from the outside world and to integrate with the local population.

When it came out in theaters in 1991, “Mediterraneo” immediately gained wide acclaim and recognition (David di Donatello and Nastro d’Argento for best film, Academy Award for best foreign film), a success also significantly determined by the soundtrack written by Giancarlo Bigazzi and Marco Falagiani, record producers and composers of a large series of Italian music famous songs and themes: the essence of this movie score is fully enclosed in the five notes of the main theme, both simple and evocative, immersed in a context of ethnic feel and Arabic/Oriental flavours. Except for some occasional modern sounds, the music of “Mediterraneo” is almost entirely produced by ‘popular’ and unconventional acoustic instruments: santouri, bouzouki, gavala, bagpipe, zurna, toubeleki, davul, rabeca and lyre.

The deep work of music research, composition and arrangement by the Bigazzi/Falagiani duo earned them the 1991 Globo d’oro Award. A soundtrack that is still memorable today, reissued exclusively by AMS Records on clear blue vinyl!