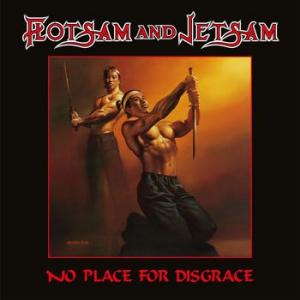 The American thrash metal band Flotsam & Jetsam originally released their second studio album No Place For Disgrace in 1988. It was their first album release on a major label, Elektra Records. The band was led by frontman and vocalist Eric “A.K.” Knutson and have been active since the beginning of the Eighties. The band has been known with their current name since 1984, but started off under the names Paradox, Dredlox and Dogz.

No Place For Disgrace is produced by Bill Metoyer, who also worked for Slayer, Hirax and Morbid Angel amongst others. The album includes the popular titletrack, “Dreams of Death” and “Saturday Night's Alright”. Three of the included tracks (“No Place For Disgrace”, “N.E. Terror” and “I Live You Die”) were co-written by Jason Newsted (Metallica).

No Place For Disgrace is available as a limited edition of 1500 individually numbered copies on translucent red coloured vinyl.