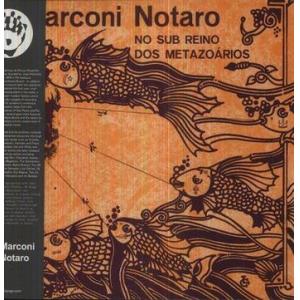 Another incredibly original album from the Solar/Rozenblit catalogue, this features the fabulous trio of Lula Cortes, Marconi Notaro and Ramalho. With Lula Cortes at the controls, writing, playing and illustrating the album cover.

Soon after recording the classic album ‘Satwa’ (MRBLP083), Lula was back in the same Recife studio with his friend, the cult poet and writer Marconi Notaro to lay down another equally magical album.

This joyous masterpiece stands musically somewhere between the Lula Cortes ‘Satwa’ and the ‘Paêbirú’ album with Ze Ramhalo. A poet’s vision in mellow song, mixed with tropicalia tinged-folk, Latin and bossa nova rhythms, uplifted by joyful experimentations with electric sounds and trance-inducing effects. Tribal-esque percussion complements the ragas, created by the beautiful sitar-like instrument ‘tricórdio’, made by Lula himself.