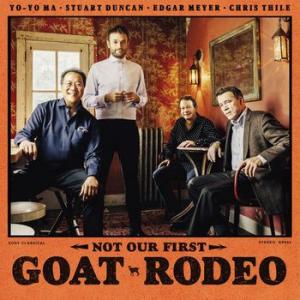 Not Our First Goat Rodeo is the long-awaited follow-up to the critically-acclaimed Grammy Award-winning album The Goat Rodeo Sessions and combines the talents of the four solo artists, each a Grammy Award-winning talent in his own right, to create a singular sound that's partly composed, part improvised, and uniquely American. The music is so complex to pull off that the group likens it to a goat rodeo — an aviation term for a situation in which 100 things need to go right to avoid disaster. Both the first album and the new recording also feature the voice and artistry of singer-songwriter and fellow Grammy Award-winner Aoife O'Donovan, who re-joins the group as a guest on Not Our First Goat Rodeo.

The new release builds on 2011's genre-defying The Goat Rodeo Sessions, which debuted at No. 1 on Billboard's Classical, Classical Crossover, and Bluegrass charts and remained at No. 1 for 11 weeks on the Bluegrass chart, marking Yo-Yo Ma's highest debut on the Billboard Top 200 albums chart.

Available as a limited edition of 1000 individually numbered copies on transparent vinyl.