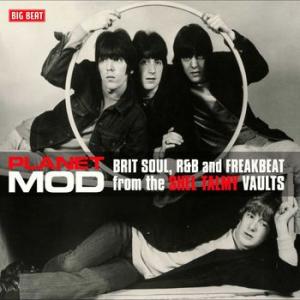 Vintage mid-60s magic supervised by the producer most closely associated with the mod genre. Club favourites, nuggets from the Planet Records catalogue and many unheard gems – all straight from the Shel Talmy vaults. Available in CD and double LP formats. LP version pressed on 180g transparent red vinyl in heavy duty gatefold jacket.

Shel Talmy is a name that any discussion of the significant stewards behind British pop’s mid-60s purple period will immediately bring to mind. Were it only for his early supervision of the Who, he would still remain a mod hero. Add the dozens of other records and artists – from best-sellers such as the Kinks to obscurities along the lines of the Mickey Finn – with which he was involved, and his role in bringing forth the most powerful examples of the genre becomes unequivocal. Even a venture that was ostensibly a failure – his bespoke label, Planet Records – has acquired semi-mythical status amongst the mod cognoscenti, thanks in part to its association with Talmy’s great white hope, the Creation.

Rather than recycling the over-familiar, the new “Planet Mod” compilation digs deep into Talmy’s rarely tapped tape vault to uncover many other fabulous examples of a genre that wields considerable influence to this day. The core of 1960s modernist taste was always black America, but in recent decades the voracious appetite of genre practitioners finds not only rock, but home-grown soul and even pop squeezed within mod’s defining parameters. Certainly, several American artists are represented, including two of the acknowledged greats of US R&B. In a scenario that is all too frequent for Talmy, there is also at least one future superstar within the assembled cast. And on the other side of the coin, we have early, unsuccessful yet exciting recordings from two vocalists who would both go on to have massive UK hits in the 1970s and 1980s, albeit with essentially family-friendly fare.

The Thoughts, Untamed, Wild Uncertainty, Tribe, Corduroys and John Lee’s Groundhogs all recorded for Planet, while others such as the Trackers and Pros & Cons were independent productions Talmy farmed out to major labels. There are rare early compositions from Bowie (Kenny Miller’s ‘Take My Tip’) and Bill Wyman (the Preachers’ ‘Goodbye Girl’), while the beans are spilled on mysterious outfits the Total and the Soul Brothers. Several tracks are alternate takes or versions, including a demo version of the New Breed’s sought-after ‘Unto Us’ and a rollicking studio jam by Goldie & the Gingerbreads. Indeed, over half the contents of “Planet Mod” are previously unreleased.

This is the first of several Ace/Big Beat collections drawn from the Shel Talmy archives, with forthcoming volumes focused on his beat and girl group productions. All come with thoroughly loaded booklets that provide unprecedented detail upon this remarkable man’s activities in that magic era.