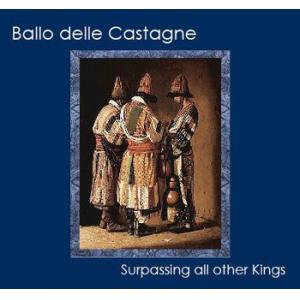 Il Ballo Delle Castagne is an Italian band that was formed in 2007 by two musicians coming from different backgrounds. Their music is an interesting blend of psychedelia, hard rock, progressive and new wave. Their sound is gothic and dark and it could remind of bands like Antonius Rex or Il Biglietto Per l'Inferno.

Vocalist and lyricist Vinz, previously brainchild of a "low-fi project" called Calle Della Morte and Marco Garegnani, previously with a band called The Green Man. The line up was completed by Diego Banchero (Malombra, Recondita Stirpe and Egida Aurea) on bass and Jo Jo on drums. The name of the band means 'The Chestnut's Ball' and it was inspired by a legend involving Pope Alexander VI (1431-1503) and his luxurious a concept album inspired by 'Wheel Of Time', a documentary film about Tibet by Werner Herzog, 'Kalachakra'. The album is dedicated to the Dalai Lama and to the struggles for the liberation of Tibet. Their new album is released on BloodRock Records and distribuited again by Black Widow and its called 'Surpassing All Other Kings'. Inspired by the Babylonian hero Gilgamesh, 'Surpassing All Other Kings' closes the Ballo Delle Castagne trilogy that began with the 10" single called '108' and the full length album 'Kalachakra'. In this third instalment, the hero awakens after many centuries and rises from his grave to find out what is left of mankind and what destiny man has chosen for himself. A sci-fi story, a psychedelic journey from Kraut to Space Rock, featuring special guests Carmen Donofrio (ex-Argine) and the members of the band Egida Aurea.