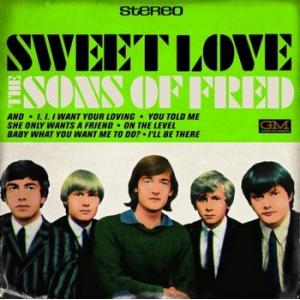 Bruce Eder writes: "An obscure but intense British beat band, The Sons of Fred featured guitarist Mick Hutchinson in their line-up. Their original sound, along their 1964 debut single on EMI-Columbia, "Sweet Love" b/w "I'll Be There," was very r&b oriented, but the band switched over to Parlophone the following year and took on a slightly more pop orientation, similar to the Hollies right down to the high harmonies and the crunchy guitars. Then, for their final single in 1966, "Baby What Do You Want Me To Do" b/w "You Told Me, marked a return to r&b before they split up. All of the Sons of Fred singles are worth hearing, and seeing as they also cut singles under the names Odyssey ("How Long Is Time," on Strike) in 1966, and, in a somewhat altered line-up, as Tandem ("Shapes And Shadows" on Chapter One) in 1969, one could come close to assembling a full album built around the group in its different incarnations. Mick Hutchinson went on to play with The Sam Gopal Dream and also played on Chris Rea's album Tennis in 1980."