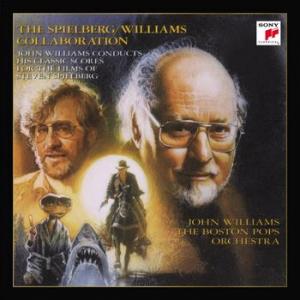 By helping each other in becoming the best known and most successful men in their respective fields composer John Williams and director Steven Spielberg build on a steady relationship. In 1991 they released their Spielberg/Williams collaboration, an attempt to encapsulate the fruits of their longtime collaboration. The first part consists of some of the best songs he composed, like the famous themes of Raiders of the Lost Ark, Jaws and E.T. The bombast and fine orchestral cues are prominent in the way Williams' translated his music to the screenplay of Spielberg. The Boston Pops Orchestra plays an important role in the different pieces Williams created. The Spielberg/Williams Collaboration predates the bulk of Spielberg's post-1980s works. It covers 15 years (1974-89), or half of their collaborative years.

For over 40 years John Williams' music has been associated with director Steven Spielberg's films. Williams has composed the scores to almost all of Spielberg's films. He earned three of his five Academy Awards and fifteen of his 51 Oscar nominations for Spielberg films.