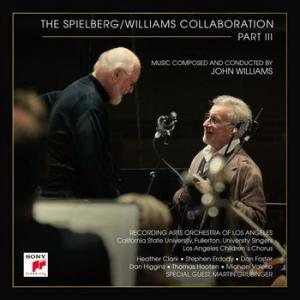 The Spielberg/Williams collaboration Part III is the third collection of songs by John Williams, selected from Steven Spielberg's movies. The disc primarily covers the last 20 odd years of the relationship, starting from 1997's Amistad and ending with their latest film The BFG from 2016. The sheer variety of music, the depth of compositional skill on display, the powerful emotions that it evokes, makes The Spielberg/Williams collaboration Part III an extraordinary accomplishment. The beautiful compositions he recorded to The Adventures of Tintin and The Terminal are just a few of all the pieces to be found on this album.

For over 40 years John Williams' music has been associated with director Steven Spielberg's films. Williams has composed the scores to almost all of Spielberg's films. He earned three of his five Academy Awards and fifteen of his 51 Oscar nominations for Spielberg films.