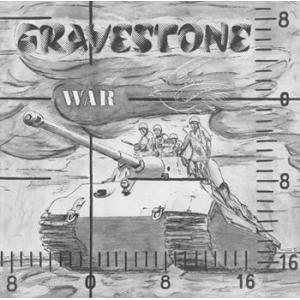 Their second and last one before they became a hardrock band. Swirling electric guitar, long instrumental parts; critical lyrics, mostly in English language. From the master tape."

In the eighties, Gravestone from Illertissen, Swabia, became quite famous as a hard rock and metal group. What many people don’t know is that they initially - and with a different line-up - released two LPs with progressive rock and critical lyrics, namely “Doomsday” (AVC K 793102 ST) from 1979 and “War” (AVC LP 80020 ST) from 1980, in small editions of 1000 copies each. Meanwhile both albums have been released as CDs on Garden of Delights; both drawn from the master tapes. In addition to a very detailed band history the booklets of both CDs contain a lot of photographs, a complete discography also of the group’s late period, cover and label reproductions, etc. “War” contains much more vocals than “Doomsday”, namely four tracks sung in English, two in German, and one instrumental piece."