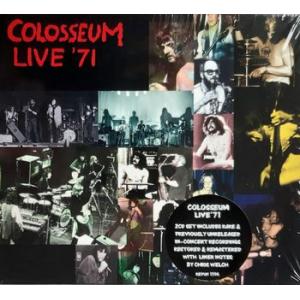 Colosseum was one of the most exciting British rock bands of the 70s and while they made fine studio albums, notably the classic Those Who Are About To Die (1969), it was on the road, playing night after night to devoted fans, that the group led by master drummer Jon Hiseman really came – alive! Mercifully, thanks to skilled recording engineers, many of their best shows were captured on tape. This superb collection of live performances reveals Colosseum blasting at full strength and with extraordinary power and passion. This 2CD set is packed with alternative versions of many of their most iconic songs and arrangements. Keyboard player Dave Greenslade and other past members of the band explain how Colosseum developed its sound and style in extensive liner notes by Repertoire’s Chris Welch, a rock journalist who saw the band from their earliest days onwards. University students were among the biggest supporters of progressive jazz rock. And so Colosseum was assured a warm welcome at Canterbury University of Kent in February 1971. CD1 is entirely devoted to lengthy performances of clever arrangements like ‘Tanglewood ’63’, ‘Rope Ladder To The Moon’, ‘Walking In The Park’, ‘Skellington’ and Jon Hiseman’s epic drum solo on ‘The Machine Demands A Sacrifice.’ A 15-minute ‘Lost Angeles’ makes a fitting climax to the Canterbury show, showcasing lead singer Chris Farlowe, together with heated playing from band members Dick Heckstall-Smith (saxophones), Dave ‘Clem’ Clempson (lead guitar) and Mark Clarke (bass guitar and vocals). CD2 has more dynamic shows recorded at the Big Apple, Brighton and Manchester University in March 1971. Among the highlights is a 21-minute epic interpretation of ‘The Valentyne Suite’ from their second album, while Chris Farlowe sings his soulful heart out on ‘Stormy Monday Blues.’ Colosseum was truly great live in 1971. Thanks to this treasure house of high quality recordings, professionally restored by digital craftsman Eroc, the band comes alive and kicking for us to enjoy 50 years later.

Live At Canterbury University Of Kent, 1971