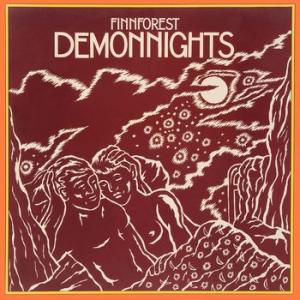 Of all the Finnforest albums, Demonnights is the Jussi Tegelman album. Finnforest’s previous records were mostly composed by his brother Pekka Tegelman but now the situation was quite the opposite: Pekka had only one composition, Jarmo Savolainen (a new member of the group) had one and the rest were composed by Jussi. Pekka had in fact left the group before Demonnights to pursue his other musical projects, but played in the album nevertheless. Despite Pekka’s presence, at the time of their final album’s release Finnforest was mainly Jussi Tegelman’s project.

Right from the start when the melodic, upbeat The First and the Happy Schoolday kicks in, you can sense that the album is very much different in comparison to Finnforest’s previous albums. First of all the lineup is bigger: Jussi Tegelman (drums, percussion, vocals), Pekka Tegelman (electric guitar, acoustic guitar), Jari “Jarkka” Rissanen (electric guitar), Juhani Aaltonen (tenor saxophone, soprano saxophone, flute, bass flute) Tuomo Helin (electric bass), Ilkka “Petri” Pettersson (vocals) and Jarmo Savolainen (piano, electric piano, Arp Odyssey synthesizer). If Finnforest’s songs before Demonnights were somewhere between jazz fusion and progressive rock, now the material is clearly more towards to jazz fusion in the style of Weather Report.

“It’s not difficult to hear from the material that Weather Report was the main musical influence”, Jussi Tegelman says now of Demonnights. This was their first album that wasn’t recorded at the Marcus Music Studios in Stockholm. With the financial help of the mid-70’s hit records, Love Records had built its own studio so they wouldn’t need to buy expensive studio time from other studios – and that’s where Demonnights was recorded as well. Måns Grundstroem – who produced the previous Finnforest albums – was the recording engineer and Jussi Tegelman was in addition to being the main composer, also the album producer.