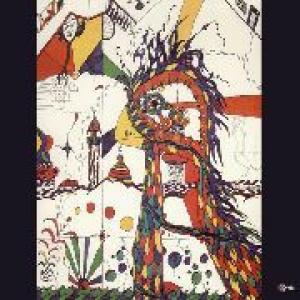 There are records that come from the soul. No matter how primitive may be the recording techniques the musician has access to, the soul gets its way to the heart and mind of the listener. "Samtvogel" is one of those records. Gr Schickert recorded that amazing piece of human greatness in 1974, using the media he had at the time, putting his brain at work to find the best way of taping everything he had to say. "When I was recording "Samtvogel" in 1974 I had only 2 Taperecorders. I played one track and while listening I added the second one. And so on. Four times. When I mixed all together I borrowed a 3rd taperecorder. And still added the last track to the master. I had a small mixer with 2 stereo and 1 mono but it was possible to pan tracks. No equalization. It all came out of my still living G2000 Dynacord guitar amplifier, of course valve, with no master, even the voice recorded through it. If I made a mistake in 1 track I had to repeat it from the beginning. And if while mixing I was not fast enough in changing the tape I had to start again. So it took me more than 3 months to get ready." Thanks to these three months of work, between June and September of 1974, Samtvogel was privately issued that same year. It would later be issued on the Brain label, with a small change in the artwork -titles added to the front cover, which werent on the original private pressing. Brain also reissued it on the labels "Rock On Brain" LP series, this time with a completely different sleeve. The album contained two tracks on side one and just one on side two, and its sound has often been compared to the most explorative works of Syd Barret - however it must be pointed that Schickert did not need any mind spreading substances to allow his sounds float out of his mind & soul, they just came out in the most natural way. It will also appeal fans of the echoed athmosferic guitar work of other kraut innovators such as Ash Ra Tempel, Manuel Gotsching Or A.R. Machines, and some may find on the vocal passages certain resemblances to Damo Suzuki on Can's 'Tago-Mago' era. The Wah Wah reissue is limited to 500 vinyl LP copies only, housed in a quality sleeve that reproduces that of the original 1974 private pressing and featuring a 4 page insert with liners and photos,sound remastered at Eastside mastering Berlin"