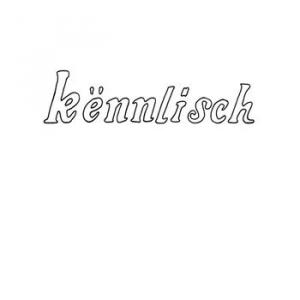 Kënnlisch, one of the rarest haunting psychedelic acid folk LPs from France, was the work of brothers Philippe and Jean-François Macherey.

Originally released in 1976 on the mega collectable label Le Kiosque d'Orphée, it contains some of the most beautiful sounds to come out of the 1970s alternative music scene.

An instrumental album, it opens with a burst of sunshine vibes and takes them into the experimental scene of French alternative folk avantgarde with a strong Cosmische influence. Beauty is the word, grown over acoustic guitar parts harmonised with the most elegant Moog Satellite lines you'll ever hear to create atmospheres of sound that make this is the perfect record for your mind to float away on a peaceful Sunday morning under a clear blue sky - it does have that therapeutic quality that we miss so much in modern music.

Wah Wah presents the very first official reissue of this mega rare LP, housed in it's original minimalist hand made artwork with the little upgrade twist of silk-screen printing and including a 4-page colour booklet with photos and text provided by the Macherey brothers themselves.