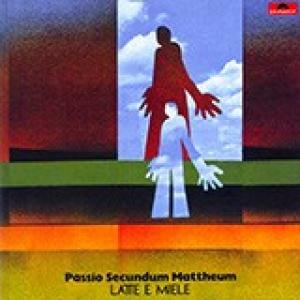 Published in 1972, "Passio Secundum Mattheum" is the debut album of the trio Latte e Miele, coming from the town Genoa. The sole title immediately clarifies the intent of the group: to convey a religious message through avant-garde pop musical coordinates, those that would later be labeled as 'progressive'.

"Passio..." consists of twelve largely instrumental episodes, interspersed with excerpts from the Gospel of Matthew. It sounds bitter at times, due to the young age of the musicians, but undoubtedly significant, because for the first time there was a transition between simple spiritual / religious songs to something far more complex, enough to be fully included in the Italian progressive rock scene.

In the subsequent two LP’s Latte e Miele will have the opportunity to further refine their technique, but the maturity of the group is already evident in this remarkable first effort.