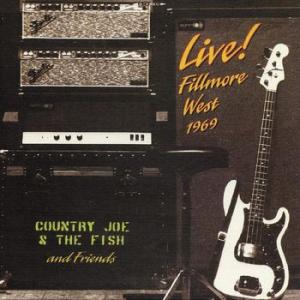 Rock and roll stars are not like us common folk. We have friends. They have FRIENDS. So when Country Joe & The Fish held a concert in 1969 to bid farewell to their most famous line-up, Bay Area rock and roll royalty showed up in droves. First of all, Jefferson Airplane bassist Jack Casady took the place of the recently departed Bruce Barthol for the entire night. Then Big Brother's David Getz showed up for 'It's So Nice to Have Your Love.' But that was all mere prelude for the 38-minute "Donovan's Reef Jam," which featured the Grateful Dead's Mickey Hart on drums and Jerry Garcia on guitar, plus Casady's Airplane band mate Jorma Kaukonen on guitar and Steve Miller on harp! This characteristically ramshackle, excellently recorded show'which also features Fish favorites like 'Love' and 'Flying High'was previously released on wax only in Italy (!) back in 2000, and it comes to you here pressed in yellow vinyl to commemorate the concert's 50th 'Golden' Anniversary, housed inside a 6-panel, double-gatefold jacket sporting notes by original producer Sam Charters and reissue producer Bill Belmont. Limited 2-LP edition of 1000!