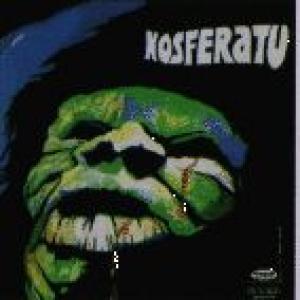 The most psychedelic work of Nuremberg masters of german-rock

Amongst the most obscure of Krautrock bands, due to being so early and on an unlikely label. In their early days they were fronted by guitarist/vocalist Michael Winzkowski (who went on to Epsilon), but apart from that, nothing is known of their history, except that winds player Christian Felke also guested later with Epsilon. Nosferatu's sole eponymous album was housed in a sinister bizarre cover, that perfectly captured the dark edge of their music, being an atypical Krautrock fusion betwixt Xhol Caravan, Message and Out Of Focus, hinting at British bands like Gravy Train or Jade Warrior. For 1970, they were pioneers, unusual in how Michael Thierfelder's vocals are often sung across the music, which so often tends to surge out into space, fronted by the dual solo instruments of guitar and sax.NOSFERATULP Vogue LDVS 17178 (1970)CD Ohrwaschl OW 020 (1993)Michael 'Mick' Thierfelder (vocals), Christian Felke (sax, flute), Michael 'Mike" Kessler (bass), Reinhard 'Tammy' Grohe (organ), Michael 'Xner' Meixner (guitar), Byally Braumann (drums) This is the big agressive sound of today, performed by NOSFERATU.The f irst time, I heard them, they were auditioning together with several other new groups, all managed by the young and ambitious German promoter Peter Hauke. I was so enthousiastic about NOSFERATU'S splendid musical ideas and their irresisteble drive that I signed them immediately for "Deutsche Vogue" and cut this album a few weeks later.Don't let me describe their music - all selfpenned -, just listen and enjoy it as much, as Conny (the engineer) and me did, when we recorded this first step into the recording business of the unusually gifted, young German group NOSFERATU!