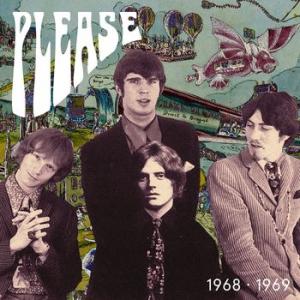 Late 60s UK underground psychedelia full of dreamy vocals and organ by this group led by PETER DUNTON and with connections to BULLDOG BREED, T2, GUN and THE FLIES. Featuring the original demo of the classic "No More White Horses", later recorded by T2 for their "Boomland" album and tracks like "Folder Man", sampled by Dangermouse for the famous "Going On" by Gnarls Barkley.

Please were formed in late 1967 when singer/songwriter/drummer Peter Dunton and bass player Bernie Jinks had just returned to Britain after a period in Germany where they played as Neon Pearl. The first line–up of Please also included organist Jurgen Ermisch (of Neon Pearl) and guitar player Adrian Gurvitz (of Gun fame) but they left no recordings. In 1968 they disbanded and Dunton joined freakbeat–psych band The Flies, writing their killer "Magic Train / Gently As You Feel" 45. That same year the Flies split up so Dunton reformed Please along with Bernie Jinks, Rob Hunt (The Flies) and Rod Harrison (Neon Pearl). After the demise of Please, Dunton was in Gun for a short time and the rest of the band formed Bulldog Breed. In 1970, Peter and Bernie Jinks teamed up with Keith Cross and formed psychedelic hard–rock trio T2, releasing the classic "It’ll All Work Out In Boomland".

During 1968–69, Please recorded a bunch of demos which were never released until 1996 when the Acme label first issued them on vinyl and CD as "1968/69". That was a major, exciting discovery for fans of late ’60s UK psych and tracks like "We Aim To Please", "The Story", "Break The Spell" or "Folder Man" are now considered classics of the genre. Out ot print for many years, we present a new vinyl edition in hard cardboard sleeve and insert with lyrics.

This is part of our ongoing vinyl reissues campaign of Please, Neon Pearl and T2 albums, celebrating the talent of Peter Dunton.