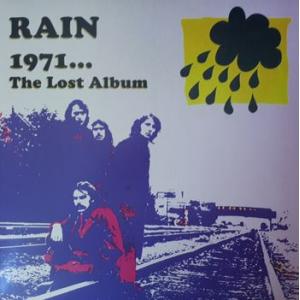 Rain was a popular blues inspired rock band from Rochester, New York. Members were Brad Morse on vocals, Ted Paris on bass, Mick Guerin on drums and led by guitar maestro, Helmut Getto. Rain was a real powerhouse in their day! This legendary band broke up shortly after recording their studio album in 1971.

Lost and forgotten for nearly 50 years, the album was never released! '1971... The Lost Album', a collection of original songs that the band recorded in the summer of 1971, was originally planned to be a follow up to their first record, 'Live Christmas Night', which came out on the band's label, Whazoo Records in early 1971. Through fate's twists and turns, the plan changed and the studio album fell by the wayside. Decades later and after lots of detective work, the studio tapes finally surfaced! These eight previously unreleased original songs have finally manifested themselves on limited edition 12" vinyl, and Jargon Records are proud to present to you this epic treasure of rock history as a part of Jargon Records' Time Capsule Series!