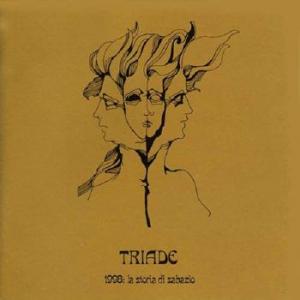 A trio formed in Florence in the early 70's by keyboardist Vincenzo Coccimiglio along with bass player Agostino '' Tino'' Nobile, that had previously played in Noi Tre, a legendary band that also included guitarists Franco Falsini of Sensations' Fix and Paolo Tofani that was in Area and later known as Electric Frankenstein.

After trying various drummers, they found a suitable one in Giorgio Sorano and Triade was born.

Signed to the Derby label, the group only released an album and a single in 1973, and had a good live activity supporting the likes of Banco del Mutuo Soccorso and Premiata Forneria Marconi and even playing some dates on their own (like a couple of memorable concerts at Pierlombardo in Milan).

1998: La storia di Sabazio includes a totally instrumental first side with strong classical influences (much in the ELP direction) and a three- track second side with vocal parts, the result is a good album The album was the result of the different tastes of the two composers, first side being almost completely composed by Coccimiglio, while the second side (that's sometimes compared with Le Orme) was more song- oriented and composed by Nobile.

Two tracks from this vocal second side, Caro fratello and 1998, with very good acoustic guitar playing, were also released on single.

Very rare and expensive in its original issue, 1998: La storia di Sabazio was housed in a nice mirror golden foil gatefold cover, and is very hard to find in perfect condition due to the delicate design. Source:www.italianprog.com