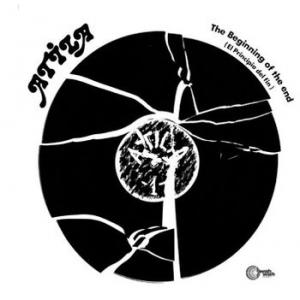 Often hailed as one the hard psych masterpieces to come out from Spain in the early 70's, "The Beginning Of The End" was the vinyl debut of Atila, a trio formed in 1973 by Eduardo Niebla -guitar- Joan Punyet -drums- y Francisco Ortega -keyboards-. Originally released in 1975 by the obscure New Promotions label in a alledged tiny pressing of 100 copies the album has reached "monster" status between die-hard collectors worldwide, sometimes reaching the 1500€ tag."An incredible progressive tour de force, the album combined the typical classical leanings, fierce guitar leads and dark keys all over in the best european tradition of the era (think italian prog). "Another rarity which finally reaches a wider audience thanks to Wah Wah in a well presented reissue that is completed by two bonus tracks plus a 7" including two more extra tracks all taken from contemporany sessions (actually same month as the album recordings) which show the band delve into Pink Floyd-territory circa More/Ummagumma (think Careful With That Axe, Eugene and you'll be pretty close). ""