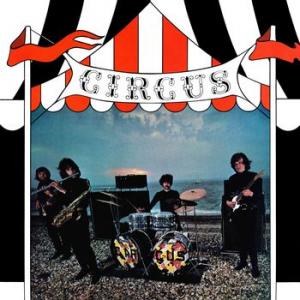 Amongst the earliest traces of progressive rock already fully gestated in the 60s alongside the likes of Pink Floyd, Soft Machine and King Crimson were a few smaller but similarly minded acts that didn’t quite end up in the history books the same way (if at all). One of these short-lived bands was a band that called itself Circus but spent most of the 60s as The Storm Shakers part of the clumsily named Philip Goodhand-Tait and the Stormsville Shakers (formed in 1961) before changing the moniker in 1967 when Philip parted ways after being wooed by the prospects of another pop group The Love Affair who were impressed with the quality of the pop writing skills of Goodhand-Tait.

After Goodhand-Tait left to write material for The Love Affair, the newly named Circus began to focus less on the pop side of music and joined the ranks of the more experimental progressive bands emerging such as The Nice, Soft Machine, Caravan, Colosseum and the brand spanking new King Crimson although the pop connections were still a major part of the band’s sound. The band experienced some minor success as The Stormshakers and as Circus attracted enough attention that their growing popularity landed it on the Transatlantic record label which began in 1961 as an import label of American blues, folk and jazz to the UK market before signing new talents (home of popular artists such as Bert Jansch). Circus found themselves debuting the one and only self-titled album on Transatlantic in 1969 and joined the nascent progressive rock scene although the prog aspects were only part of its overall diverse sound.

Circus was a tight knit jazz-rock band that crafted some high quality musical workouts which mixed the heavier aspects of late 60s rock with the nuances of jazz modulations, folk, pop and even traces of psychedelia. Add to that a stellar Latin influenced percussive flair that added an impassioned mix of jazz and ethnic drive to create an innovative melting pot of juicy jazz-rock yumminess. Collins was the star of the show here with sizzling hot sax and flute solos but with the addition of the musical virtuosity of the rest, Kirk Riddle killed it on bass, Ian David Jelfs delivered some excellent blues / jazz guitar workouts and provided the vocals while Chris Burrows created his own tapestry of drumming diversity. Producer Ray Singer who had been the guitarist of the early UK band Nirvana and had success with the #1 hit “Where Do You Go To (My Lovely)” took up the role as producer and added his “fifth member” touches to make the music coalesce.