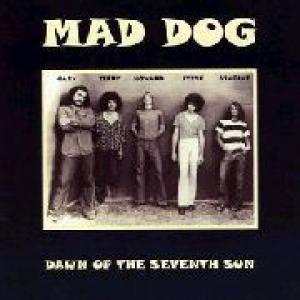 Monstruous and unreleased at the time heavy psychedelic Westcoast artefact of the highest order. This is one of the five best ever promo only releases to emerge from California. Only released in a quantity of a couple of copies to get a major record deal that never materialized. Three of the songs were used in a low-budget biker flick called 'Black Angels'. This hidden gem was found while looking for unreleased music by the band 'The Zoo' of 'Presents Chocolate Moose' fame. The original producer told that a demo LP was released by THE ZOO after the 'Chocolate Moose' album, under the name JOYFUL NOISE, but at this time they were looking for a tougher name to fit the music and they found MAD DOG. Under this name a couple of test pressings were done. Earlier released as C1/C2 without any kinds of info using the numbers from the dead end part of the vinyl. The C was for CAVETT, the producer's name..."