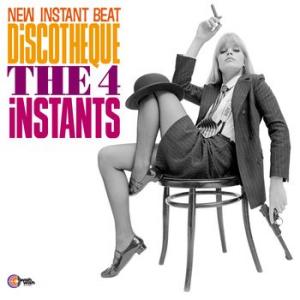 Here we unearth a missing nugget! Very little is known of The 4 Instants. They do not even appear on the Tapestry Of Delights (a.k.a. the Holy Bible of UK beat/R&B/psych/prog...). Undoubtedly released as a teen exploitation album in 1966 by Saga on the Society subsidiary, the LP offers a tight mod R&B instrumental sound all through it, with killer Hammond organ and sensational guitar licks. Everyone into all night mod jazz / R&B partying shall consider this LP a classic on its own from now on! Think of Graham Bond Organisation, Dave Davani Four, The Mohawks or any of those great mod jazz / soul jazz LPs that were imported from the US in the era and you'll get a close idea of what this album sounds like. Mostly offering killer versions of hits of the day ("Watermelon Man", "Mashed Potatoes", "Monkey Time"...) there is also one top sounding cover of the classic Ellington tune "Caravan" and three fantastic tunes written by the band, the credits of which give us the clue of the musicians involved, drummer Clem Cattini being one of them - thus throwing connections to other greats of the genre such as The Mohawks or Ugly Custard, and giving an idea of how TIGHT this band sounds, since Cattini (who had preeviously been in The Tornados and recorded under the direction of Joe Meek) was one of the more in demand session drummers and his work can be heard in many of the number one hits of the sixties and seventies. Sensational playing in an energy-plenty recording.

This obscure jewell seems to be still completely unknown even among those into the coolest of the cool, maybe due to the non too well chosen original sleeve, to which our design team is giving a twist in order to make this exceptional LP look as fab as it deserves! A unique sleeve for a unique pressing of only 500 copies! "