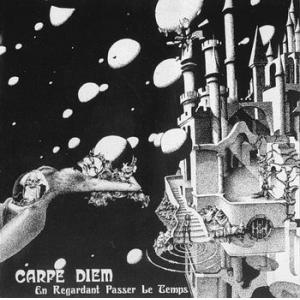 “The album practically encompasses the diversity and inspiration of the French progressive rock underground. It is, easily, one of the finest albums to have emerged from that scene. At the risk of sounding like a raving fanboy, En Regardent Passer Le Temps is indeed a classic record for the ages.” —Greg Northrup, Progweed

Formed in 1970, Carpe Diem started out playing covers by the likes of East of Eden, King Crimson, Deep Purple, and Uriah Heep in clubs along the French Riviera. Original compositions made their way into the band's repertoire over the five years between their formation and the release of their debut album, "En Regardent Passer Le Temps,” in 1976. Little wonder then that the band sounds as magnificently tight, polished and mature on this classic debut, truly one of the gems of the French rock scene. The success of the album brought them dates with other major French bands like Magma and Ange, led to the recording of a second album, and then ultimately to the sort of nearly total obscurity which deserves to be undone with a reissue such as this one!

"Carpe Diem weave spacey, melodic soundscapes of impossible subtlety and beauty, combining woodwinds and all manner of synthesizers with surging, inspired guitar solos. The playing is free and loose, while yet retaining an air of careful composition. Guitar parts and multiple keyboard lines lock into precise, tightly meshed melodic webs, building tension before bursting into emotive, furious climaxes. Soaring, cosmic guitar melodies glide along churning synthesizer rhythms in the aptly titled opener ‘Voyage du non-retour’ (Voyage of No Return). The three lengthy tracks that almost evenly divide the album's remainder are uniformly excellent, with nary a superfluous or unnecessary moment. It says something when, in listening to an album, each track convinces you independently that it, indeed, is the best cut on the record. ‘Reincarnation’ features understated, yet gorgeous, vocal passages in between fiery instrumental portions. The flute and mellotron introduction of ‘Jeux du siecle’ perfectly sets up the driving grooves to come. In closer ‘Publiphobie,’ fluid bass-lines and ultra-tight rhythmic work provide the foundation for heavily syncopated, enchanting saxophone melodies. Subtle, smoky vocals return to the fore later in the track, before the band jumps into the closing instrumental finale.” —Greg Northrup, Progweed