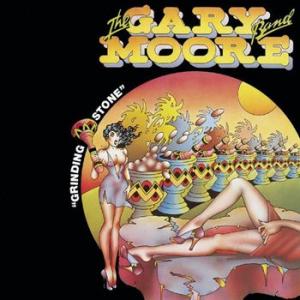 Gary Moore was a celebrated blues guitarist from Belfast. He started playing in the sixties with Phil Lynott and Brian Downey which led to him joining first Skid Row and then Thin Lizzy followed by Colosseum II. Moore also enjoyed a distinguished solo career sharing the stage with the likes of B.B. King, Albert King, John Mayall, Jack Bruce, Albert Collins, and Greg Lake. He is perhaps best known for his top ten hit Parisienne Walkways.

Grinding Stone was his first solo outing released under the name Gary Moore Band. It’s an eclectic mix of boogie, rock and blues as well as 17 minutes of guitar and keyboards (courtesy of Jan Schelhaas) in the surprisingly funky track "Spirit”. Schelhaas went on to play in Caravan and Camel.

Moore died of a heart attack in his sleep at the age of 58 in February 2011. A large statue of him was erected on a small island outside Skånevik, following his many performances at the Skånevik Blues Festival.