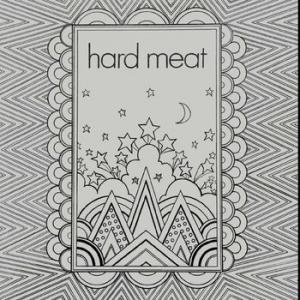 First official reissue under license of Warner Music! Hard Meat were a British progressive rock group (1969-1971), founded by Brothers First official reissue under license of Warner Music! Hard Meat were a British progressive rock group (1969-1971), founded by Brothers Mick (guitar and vocals) and Steve Dolan (bass) and completed by American drummer Mick Carless. The first recordings were a 7" on the Island label in 1969, but dropped by Island, the band very soon reappeared with 2 long players on Warner Brother Records in early 1970 and late 1970, which today are very sought after by all lovers of late sixties early seventies guitar oriented British progressive and psychedelic rock. Musically quite varied, all seven tracks of the first eponymous album are powered by Michael's likeable strong remarkable voice and his very impressive lead guitar and Carless' Keith Moon-styled percussion. The opener 'Through a Window' (which curiously became the title of their sophomore LP) offered up an enthralling mixture of all of those earlier genres which should have become a radio classic. It opens up with some pretty accoustic guitar and quickly shifted into an attractive melody that's always reminded of a mash-up between English folk-rock and Hendrix at his most progressive. There was a lot going on here but it was all driven by Carless' frenetic drumming and Dolan's guitar and strong voice. With a sunny, lysergic feel, 'Universal Joint' sounded like something recorded in the mid-'60s. 'Run Shaker Life', the album's longest track found the trio showing off their hardest rock orientation and complete with a bit of raga influence, the results were stunning. Guitar rock at its best. 'Yesterday, Today, Tomorrow' is a beautiful acoustic ballad that sounded anything but acoustic. Showcasing Dolan's wonderful acoustic guitar work, it was one of those songs that picked up speed and energy and ended way too soon... 'Space Between' was built on what sounded like a native American rhythm with a touch of lysergic influences thrown in for good measure. Different, but engrossing and the tune showcased Mick on electric guitar. 'Time Shows No Face' is the album's prettiest tune, for some reason on this one Dolan's vocal sounds beatlesque and Phil Westbrook provided a great flute solo. The recordings have been remastered very carefully. Many thanks to Warner Music, who gave Longhair access to their archive and an excellent transfer of the tapes. This and the loving one, time-consuming occupation with the sound material by Long Hair's sound engineer are responsible for the brilliant sound of the album decisively. The album comes with insert and band story. Extremely highly recommended. Definitely one of the best LH releases!!