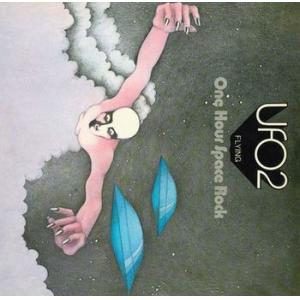 Our collectable vinyl re-issues are as close as possible to the original LPs.

The LPs are mastered at Half Speed at the legendary Abbey Road Studios, then pressed onto 180g vinyl, offering the listener the best ever sounding version of the album.

The recordings are remastered by Jon Astley (The Who, Led Zeppelin, George Harrison & many others).

The sleeves are printed from superior quality scans with detailed reproduction artwork.

Confident and focused, the band embraced the cosmic sounds of Mick Bolton's guitar and made the transition from blues and psychedelia to heavy cosmic rock. There is some spacy stuff to be heard on extended arrangements like ‘Silver Bird’ and ‘Star Storm’ that have long, trippy instrumental passages.

Including perennial UFO favourites ‘Prince Kajuku’ and ‘The Coming Of Prince Kajuku’, the album climaxes with the slow and ethereal ‘Flying’, one of UFO’s longest recorded works.

SIDE 2
1. The Coming Of Prince Kajuku
2. Flying