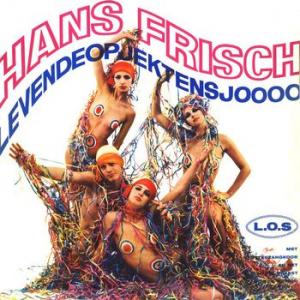 Once more the Netherlands proves to be fertile ground for adventurous sonic explorations defantly untainted from outside infuences. The Levende Opjekten Sjooo (L.O.S.) was developed by Artist Hans Frisch, who had made a name for himself as a painter by dripping black car paint on white formica panels, calling this: Clean Art. His next project involved a set with moving statues and music. The statues were actually naked dancers hidden between layers of linnen and plastics. As soon as the music started they would erupt from their disguise and start dancing naked on stage to a rather organic & compulsive music that discarded melody in favour of strange sounds and rhytmic patterns. Through a series of fortunate events, the L.O.S. was invited to make a record, which they did in a short 4hour session with the use of Flutes, percussions and a Philicorda Organ.The result was a true testimony to what the L.O.S sounded like to the few thousand people who were lucky enough to experience them live. Some pictures of some of the shows survived as well as a handful of original copies of this record. Most copies were confscated by the police and the rest dissapeared. Luckily we were able to unearth an original copy from which the music was then remastered, with kind authorization by two of L.O.S. band members. We hereby present a restored and remastered version of an utterly rare document of Dutch Psychedelia lost for decades.