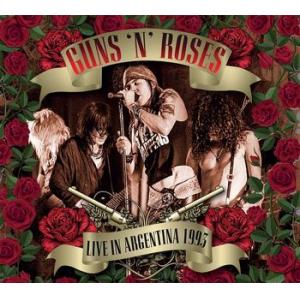 Guns N Roses smashed their way to the top of the rock world, thanks to their uncanny synthesis of sexual obsession, paranoia, rage, insecurity and arrogance. They were at the peak of their success and notoriety when they embarked on their hotly anticipated Use Your Illusion world tour in January 1991 and came away two years later relatively (physically) intact. One of the longest concert tours in rock history ever undertaken, it took in 194 shows in 27 countries, drawing to a close in July 1993. This superb set captures the band at their raucous best on the first of two closing nights of the world tour in Buenos Aires, Argentina, thus marking the final appearances of the original band before the post-Velvet Revolver comeback. The Latin love affair with G N’ R sees the band performing a cross-section of their best-known material, as well as numerous covers with copious amounts of energy and the trademark attitude. Slash’s favoured stripped-down and raw edge of the later shows is evident here, but also signalled the end of the band’s greatest era.