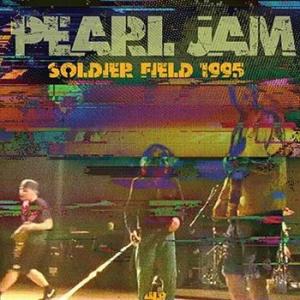 On July 9, 1995, the Grateful Dead played what would be their final show at Soldier Field before packing up as a favour to a band who, because of venue cancellations, were forced to move their show to the uncomfortable confines of a football stadium. That night, Pearl Jam played their longest show to date, nearly three hours later, they had delivered what should rank amongst their finest nights as a band.

Here, Pearl Jam are five guys, hell bent on annihilating everything in sight including their own instruments which sadly, wouldn’t survive the explosive carnage that marked this amazing show. Unlike their Seattle counterparts, Pearl Jam had nothing to lose, so they played until they had nothing left. The intoxicating adrenalin and force of nature unleashed here in Chicago, is testament to the bands continued revolt against virtually everything in the industry and a sign that as their manager bluntly stated, they were a band “fighting on all fronts”.