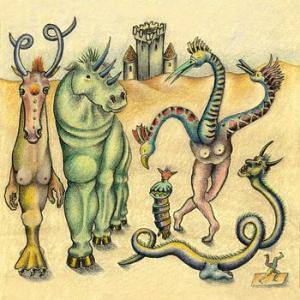 A limited edition release of the unreleased recording of PLVG (pronounced "plug") recorded in 1973. Comes on coloured vinyl, with insert. PLVG is formed of ex-members of the band Calcium, considered the cream of French studio musicians.

In May 1971, soon after his triumphant Olympia 70, singer Julien Clerc surrounds himself with musicians Charles Benaroche and Denis Lable. They are joined in 72 by Stéphane Vilar (ex-Calcium) who had just composed the music of Circus Bonjour, Jean Claude Poligot, Richard Lable and Philippe Gall. The band thus constituted, accompanies the singer contentiously.

How many musicians in France have been obliged to perform marketed music to be able to live of their trade? But this time the performers who dream of forming a rock band again, strain against the reins and form a band between two tours with a real original musical repertoire.

Tracks are registered with the title “Les Trottoirs” (the sidewalks). Stephen Stills, who was staying at Julien Clerc's house at the time (where he meets Véronique Sanson his first wife, future mother of his son Christopher) says "it's a hit” as soon as he listens to the song. Julien Clerc, more pragmatic, thinks there is no way it can happen in France. The singer, who built his entire career in formalized music and played in the musical Hair, knows too well that at the time there was no market in France for this kind of music. He nevertheless agrees, for the band to perform during the first part of his shows.

It was during the summer tour in July, August and September 1973 that the band under the name of PLVG (acronym for Poligot, Lable, Vilar, Gall) made its debut in front of a dumbfounded audience. Whilst taking a break from touring the following month, the group records a dozen titles at the Ferber studio between November 73 and February 74, joined by Zouzou on a cover of a Calcium track: “This morning”. But the album never saw the light of day, because unluckily, Julien Clerc no longer performs on stage, other than in recitals for his Japan and Canada tour, and the band loses the opportunity to play on stage.

In addition, France Gall, who in the height of her career, lives with Julien Clerc since August 1969, leaves him in 1974 for Michel Berger, another great star of French commercial music. Julien Clerc, annoyed, dismisses the musicians: Philippe Gall, Denis and Richard Lable (respectively brother and cousins of the singer). They are replaced by Gerard Bikialo (ex Magma) at the keyboard, Georges Kawczynski (nicknamed “Crapou”) on the guitar and Christian Padovan on the bass (both ex Système Crapoutchik).

Out in the wild, the PLVG band members will then continue their career as studio musicians appearing on many recordings.

Phillipe Gall goes on to compose the soundtrack of Fréquence Meurtre in 1988, Elizabeth Rappenau's film with Catherine Deneuve.

Jean Claude Poligot goes on to appear in other albums by Jean Claude Vannier, Hugues Aufray and Jacno.

> Stephane Vilar goes on to compose many music for movies and plays.

Denys Lable goes on to be part of many different bands including the famous project Utopic Sporadic Orchestra with Christian and Stella Vander of Magma, Didier Lockwood, and Jannick Top and especially plays the guitar in 1972 on the legendary album of Jean Claude Vannier L’enfant assassin des mouches.

Richard Lable goes on to make appearances on albums by Catherine Lara and Hugues Aufray amongst others before attempting a solo career.