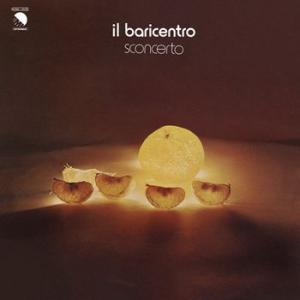 Yet another 'out of time' band from the glorious golden season of Italian progressive rock, Il Baricentro - a name that does not coincidentally reveals the musicians' origins (Bari/center, Puglia) - were founded in the mid-'70s by brothers Francesco and Vanni Boccuzzi, out from the ashes of Festa Mobile.

The debut "Sconcerto" saw the light in 1976: a beautiful instrumental jazz-rock LP, in which keyboards dominate over every other instrument. Despite the season of punk, new wave and disco music standing right behind the corner, the album is firmly anchored to the warm sound of the early '70s; already at the time Baricentro were often compared with Weather Report and Return to Forever, but there's a strong difference in their Mediterranean flavour, the one that has made many Italian prog productions unique, "Sconcerto" included.

First ever reissue in LP format, in colored vinyl and in a faithful reproduction of the original cover.