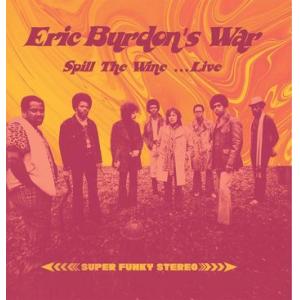 “Eric Burdon remains a curiously compelling live performer and one of rock’s most worthy sons. His rock ‘n’ roll pedigree is unquestionable and grounded in a deep and unflinching devotion to American blues, jazz and R&B. Emerging from the north of England, his journey to America in 1964 would produce a rich and profound back catalogue that helped form one of the USA’s most influential and iconic acts to grace the late 1960s music scene; WAR. Aside from famously playing alongside Jimi Hendrix only hours before his untimely death, WAR remain an uber-cool facet of the funk rock revolution, an intoxicating marriage between blues, R&B, funk and rock that has been sampled by the likes of DJ Shadow, Beastie Boys, Offspring, De La Soul and many more. In 1970, hey were riding high with Spill The Wine and their debut LP, profiled here in this spotless TV broadcast from Germany. Victory is Peace!! Rox Vox proudly presents an electrifying performance by Eric Burdon and War, captured live in Germany in September 1970 promoting their debut LP Eric Burdon Declares War! Combined with a host of rare archival photos and extensive liners and interviews, Burdon’s War is compelling account of late 60s hedonism and of one of America’s finest funk/R&B outfits to emerge from the cultural revolution.