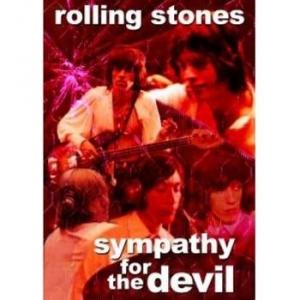 Sympathy For The Devil was a film made by Jean-Luc Goddard in 1968. Essentially the film is two films within each other hence the films original title One Plus One. The main plot of the film follows the Rolling Stones in the summer of 1968 rehearsing and recording the song Sympathy For The Devil.

Intercut or perhaps interwoven would be a better word are scenes of the Black Panthers in a junkyard in London. Another important factor is the voiceover which takes on the role of a political message about Marxism and revolution which were no doubt subjects that were close to Goddard's heart. Bear in mind that 1968 was a turbulent year with both Martin Luther King and Robert Kennedy being assassinated in that year literally within weeks of each other and there was rioting in both London and Paris although for completely different reasons.

Having been distracted for most of 1967 by numerous drug busts which saw three of the Rolling Stones, Mick Jagger, Keith Richards and Brian Jones jailed, albeit briefly for drugs offences. 1968 would turn out to be a better and more productive year all round with the Stones back in form with a return to roots single Jumping Jack Flash and the album Beggars Banquet which included the song Sympathy For The Devil as one of the key tracks.

For many this film will be interesting for the footage of the Rolling Stones captured working in Olympic Studios on the song Sympathy For The Devil. The film captures the Stones up close rehearsing the song and slowly but surely the song takes the shape we all know.

Unfortunately the film also documents the decline of Rolling Stones guitarist Brian Jones who at the time of filming was just over a year away from his death in July 1969 and during parts of the film Brian Jones can be seen noticeably slipping away with rest of the band barely noticing his sad decline and disconnection from the band he founded just some six years earlier.

Sympathy For The Devil has been unavailable for some time and its reissue on DVD will be warmly welcomed by fans and critics alike as it captures a moment in time. A very important moment in time!