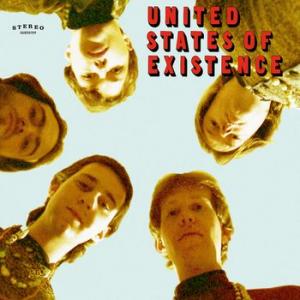 United Sates Of Existence were one of earliest neo–psychedelic groups from the US. Born in Baltimore in 1978 out of the ashes of prog–rock outfit Klangfarb, their goal was to reproduce the sound of their favourite 60s psych bands: Strawberry Alarm Clock, Electric Prunes, Blues Magoos, Nazz, The Assocation...

The group used vintage instruments and antiquated recording techniques to fully embrace the sounds of the first psychedelic era (1967–68). They never got to play live, preferring to spend their time recording in their basement studio or going on record–buying binges at all the discount stores, searching for obscure psychedelic albums with weird names like Harumi, Phulph, Bohemian Vendetta...

They were championed by Greg Shaw (Bomp!) who chose one of their first recordings, the killer Return To The Psychedelic, as the opening track for the seminal Battle Of The Garages LP compilation (1981). They also appeared in another famous compilation, The Rebel Kind (1983).

Anything Goes!, their first 45, saw the light in 1984, self–released on the band’s own label, U.S. Fidelity Sounds, and featuring members of the Association on backing vocals (no kidding!). In 1986, they caught the attention of the Bam Caruso label from the UK, where they released their only album, Introducing: the United States of Existence, in 1986.

The Psychedelic Yesterdays Of Tomorrow compiles all the material released by United Sates of Existence, including their Bam Caruso album along with various single / compilation tracks, as well as a few previously unreleased tracks and alternate mixes.

"Surround sound not required – these stereo recordings will transport the listener to the proper state of existence. Recorded in the band’s basement and mixed down on a picnic table – because that’s where it was all happening."