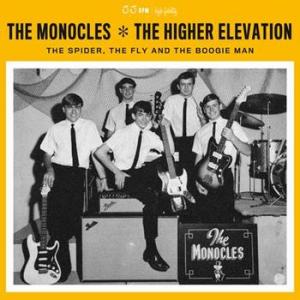 Most people were introduced to the bizarre psychedelic sound of The Monocles (later The Higher Elevation) thanks to the inclusion of the bizarre “The Spider & The fly” and “The Diamond Mine” on the legendary Pebbles Vol. 3 (the “acid-punk” volume). These youngsters from Colorado formed in 1964 and they were famous for driving to gigs in a custom Cadillac hearse. Between 1965 and 1968, they released a bunch of singles for different labels: Chicory, Denco, Liberty…

This retrospective collection includes the best of their 45 sides plus some previously unreleased on vinyl tracks.