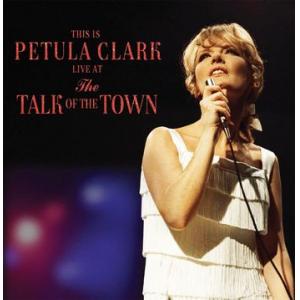 Petula Clark, highlights from ‘This Is Petula Clark’, ‘Christmas Night With The Stars’ and ‘At The Talk Of The Town – Just Call Me Pet’

Ever since the million-selling Downtown put Petula Clark firmly at the top of the hit parade back in 1964, its success mirrored that of her career which spilled over into films and television on both sides of the Atlantic. Clark's recording successes led to frequent appearances on American variety programmes hosted by Ed Sullivan and Dean Martin, which led to an Oscar-winning alongside Fred Astaire. By 1967, she was a household name not only in the USA, but similarly in France and at home in her native UK. Numerous TV showcases and 15 consecutive Top 40 hits around the world counted in her success story as one of the UK’s most successful female singers of all time. Coupled with a prized selection from her first ever TV series ‘This Is Petula Clark’ in 1967, highlights from her appearance on ‘Christmas Night The Stars’, and ‘Just Call Me Pet’ from March 1967, London Calling proudly presents a spectacular tribute to the once wartime sweetheart with "a voice as sweet as chapel bells" who became the “first lady of pop” and holder of the CBE. This deluxe double package boasts superb, professionally remastered original BBC broadcasts with background liners and timeline photos.

Highlights from THIS IS PETULA CLARK

1 Here There And Everywhere (Lennon / McCartney)

3 If This Isn't Love from Finian's Rainbow (Lane / Harburg)

4 At The Crossroads from Doctor Dolittle (Bricusse)

5 The Other Man's Grass Is Always Greener (Hatch / Trent)

My Name Is Petula (Clark) >

My Name Is Petula (Clark)

This Is My Song (Chaplin) >

10 Beautiful In The Rain (Hatch / Trent)

Look To The Rainbow (Lane Harburg) >

On That Great Come And Get It Day (Lane / Harburg)

Highlights from CHRISTMAS NIGHT WITH THE STARS

Petula is introduced by Ernie Wise.

Our Love Is Here To Stay (Gershwin / Gershwin) >

Our Love Is Here To Stay (Gershwin / Gershwin)

3 Typically, English from Stop The World I Want to Get Off (Bricusse /Newley)

My Name Is Petula (Clark) >

My Name Is Petula (Clark)

9 I Couldn't Live Without Your Love (Hatch / Trent)