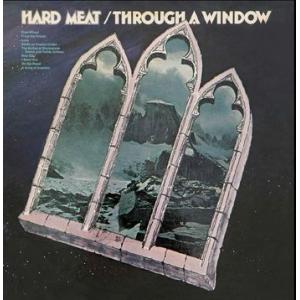 First official reissue under license of Warner Music! Hard Meat were a British progressive rock group (1969-1971), founded by Brothers Mick (guitar and vocals )and Steve Dolan (bass) and completed by American drummer Mick Carless. The first recordings were a 7" on the Island label in 1969, but dropped by Island, the band very soon reappeared with 2 long players on Warner Brother Records in early 1970 and late 1970, which today are very sought after by all lovers of late sixties/early seventies guitar oriented British progressive and psychedelic rock. 1970's 'Through A Window' was a modest departure from the debut. On a song-for-song basis the sound wasn't as "rock" oriented, but the band made up for that with a more varied and dynamic sound. This time out you also got to hear plenty of Mick Dolan's dexterity on acoustic guitar (check out 'Freewheel' and 'A Song Of Summer'). Featuring another set of largely original material co-written by the three band members, these guys were one of the tightest trios you ever heard. Very few wasted notes on any of these tracks. All hyperbole aside, Michael Dolan was one of rock's most overlooked singers and lead guitarists. Similarly, brother Steve and drummer Carless made for a dynamic rhythm section, capable of way more than the standard hard rock trio repertoire. The recordings have been remastered very carefully. Many thanks to Warner Music, who gave Longhair access to their archive and an excellent transfer of the tapes. This and the loving one, time-consuming occupation with the sound material by Long Hair's sound engineer are responsible for the brilliant sound of the album decisively. The album comes with insert and band story. Extremely highly recommended. Definitely one of the best LH releases!!