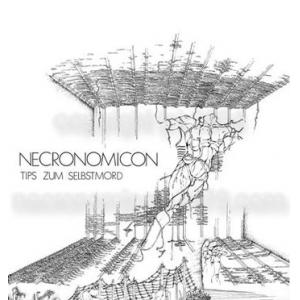 Necronomicon came from Aachen / Germany and they were called after a book of H. P. Lovecraft, a horror- and sience-fiction-author, where all possible horrors on this earth are discribed. It was one of the few German bprog-rock bands, whose vocals were in german, like Gäa or Eulenspygel. Its only releae was recorded in 1972 in a small studio in Kerkrade. The records were produced by Carl Lindström in an edition of 500 copies. The title of the LP is ambigous, but doesn´t describe how to stop Your life at it best, but refers to mankind, who is devastating earth, and thus destroying its own basis for living. With the self-made cover they had something special in mind: it has six sqares and buils a cross, when opended and so it fits closely to the music and the texts and the whole production did build a total cocept. Due to the exeptional production, this LP today belongs to the most sought-after European prog-rock-Lps. Prices in best condition raise to ¤ 1.800,- meanwhile. The reissue, which is offered here, also has a six-part gimmix cross-cover, which was produced in one (!) part on one of the few german print-machines, which are able to do this. With insert and as 180 gram-quality-vinyl!