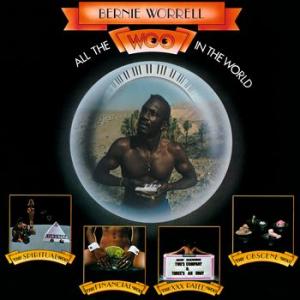 All The Woo In The World is the debut Funk album by Parliament-Funkadelic keyboardist Bernie Worrell, originally released in 1978. The album was pressed in limited amount and is heavily sought after by collectors. The keeper track of this marvelous album is "Insurance Man for the Funk" as its 12 minutes and 39 seconds of pure P-Funk. It has everything; layered sounds, a toe-tapping mid-tempo beat and some incredible horns.

On some of the other tracks Bernie still does most of the lead vocals, but Junie Morrison plays a significant role. The album features various P-Funk alumni as well, such as Garry Shider, Bootsy Collins, Billy Bass Nelson and Eddie Hazel.

Dubbed the "Wizard of Woo," Worrell is credited with giving the funk outfit their futuristic sound with his incredible use of synthesizers.